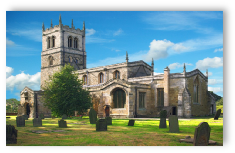 A brief history of Thorne and the Church, through NEOLITHIC, BRONZE & IRON AGE,  SAXON & NORMAN occupation to the 14th century granting of Parish status for Thorne.

A plan of the church as it is today, with  various points of interest for visitors.

Thorne became a permanent settlement in the Anglo-Saxon period about thirteen centuries ago, but we know from the finds of flint tools and weapons that Neolithic people used this land; as also did the people from the Bronze and Iron ages from items still been found in the peat diggings on the moors, that people from the bronze and iron age also used the land.
The first Saxon community of Thorne probably began in the 6th century A.D. and it was to all intents and purposes an island settlement; the area being surrounded by water and marshland.

The water was from the River Don which was carried swiftly from the heights beyond Sheffield, but whose drainage to the sea was impeded by a vast flat area which extended from Stainforth to the Humber.  This area was so low that it was below the level of the daily high tides in the river systems and caused regular flooding of all but the highest ground.

The Saxon settlers of Thorne found ample dry ground on which to grow their cereal crops and flesh, fish and fowl abounded in the surrounding marshes.  They would be highly skilled at hunting deer, netting fish, trapping eels and wildfowl.

The original Saxons were pagans and worshipped the grim gods of the Scandinavian and Northern European  tribes.  Their fathers had taken their families and possessions in open boats and rowed them across the North Sea to find new homes in Britain.  They had arrived after the  Romans had left in the 5th century A.D.  During the 7th century, due to the brave missionary Christian monks of St Augustine, many Saxon tribes were converted.  Edwin the King of Northumbria, who had a hall at Hatfield, had a Christian wife.  A Church was built at Hatfield and Thorne was then in that parish.  It is probable that an original Church at Thorne was Saxon built prior to the Norman conquest.

With the Norman Conquest came real organisation and the lord of the manor of Thorne was William de Warren, who was the builder of Conisborough Castle, his local headquarters. It was at this time in the late 11th century that the Normans built the Motte and Bailey castle known now as Peel Hill.

This was followed a few years later by a stone church built next to the castle. The stone used for both these buildings was magnesian limestone which was quarried from nearby Sprotborough and was transported to Thorne by boat on the River Don. The castle was later demolished around the 17th century but the same stone used can be found around Thorne in its walls, such as Fieldside House.

About a mile to the south-east of the church was a large expanse of water called the Bradmere, and the same distance to the west was another stretch of water separating Thorne and Hatfield. It was while crossing this latter water in boats that a funeral party was lost in the 1320’s. The corpse and several mourners were cast into the water, and the bodies of about twelve people were recovered some days later. As a result of the tragedy the Abbot of St. Mary's in York was petitioned and granted that Thorne church be rebuilt and made a parish church so that the dead could be buried at Thorne instead of Hatfield.
The petition was granted on the 17th January, 1326.

THE LIVING OF THORNE

The Earl of Warenne gave the presentation of the Living to Lewes Priory in Sussex, but it later reverted to the Warennes who, in 1345 granted it to Roche Abbey a few miles west of Bawtry.  At the dissolution of the monasteries in the 16th century, the gift passed to the Crown.  Queen Elizabeth 1 presented it to the Countess of Shrewsbury and from her it descended to the Duchess of Devonshire.  By 1730 the gift was in the hands of the Earl of Portmore who sold it in 1778 to Sir Henry Etherington.  From Sir Henry the gift passed to his niece, and afterwards to the Duchess of St Albans.  In 1885 it went to the Hon. A. B. Coventry who received  3,00 pounds from the tithes.

The present patron is the Bishop of Sheffield, and all tithes are now carefully administered by the Church Commissioners, the income from which pays the clergy.

A PLAN OF THE CHURCH AS IT IS TODAY 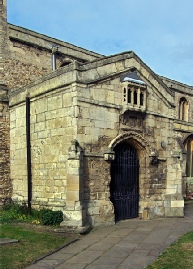 This dates from the 15th century and was originally two storeys.

The upper chamber must have been entered from the south aisle by a wooden stair through a door , the east jamb of which is still visible. Before you enter the church, look up above the porch doorway and notice the now indecipherable Coat of Arms of one of the sons of the Earl of Warenne, who had been granted the Great Fee of Conisbrough (which included Thorne) by William I.

The doorway into the church is Norman.

By the year 1200, the church building had virtually attained its present dimensions.

The South Yorkshire Archaeological Survey states “the overall plan and wall thickness (of the nave) would be compatible with a pre-Conquest church”.

The nave is the main body of the church. The word comes from the Latin ‘navis’ meaning ‘ship’, as it was thought that the nave roof resembled an upturned ship. 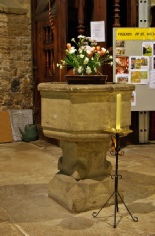 The font has traces of the two iron staples dating from medieval times.

These would have been used to lock the font lid to prevent the holy water from being stolen.

Behind the font, notice the unusual wooden staircase leading up to the belfry. 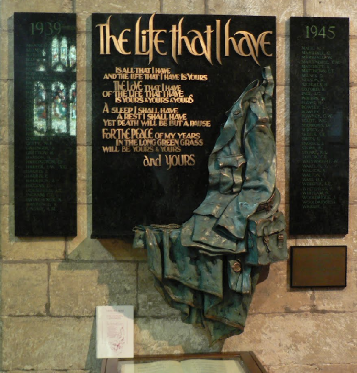 There are a number of interesting memorials in church.

The most impressive is the modern war memorial to those who gave their lives in the Second World War. It is the work of local sculptor, Byron Howard.

On the north wall notice the blocked doorway. North doors were sometimes called ‘devil’s door’ and would have been left open during baptism to let out any evil spirits.  Many north doors were blocked up after the Reformation. Above this is a Royal Coat of Arms dating from the 17th century. On either side of this are the RNXS (Royal Navy Auxiliary Service) standard and that of the Thorne and Moorends Women’s Section of the British Legion. To the right is the First World War memorial.

As you move towards the Lady Chapel you will see an aumbry, a small lockable cupboard which houses the reserve sacrament (consecrated bread).

Before you walk under the fine rood screen into the chancel, you will see a Madonna and Child, made from cast stone by a local miner. Can you find the mouse trademark on the table made by Robert Thompson of Kilburn?

THE CHANCEL (8)The chancel is the oldest part of the church, possibly of Saxon origin, and indicates the probable size of the original chapel of ease. Much of the building material is of uncoursed river cobbles. Notice traces of earlier Norman windows on the east wall. On the south wall of the chancel is an ancient memorial (1717) with skull and crossbones.

The altar is the heart of the church, where communicants share the Eucharist, remembering the Last Supper. To the left of the altar is the organ, a fine instrument of wonderful tone and subtlety. To the right you will see the piscina, a niche containing a shallow stone basin with a drain hole which was for the disposing of holy water used to wash the Communion vessels.

As you move out of the chancel you will pass the lectern. This is a brass eagle with outstretched wings, standing on a ball, which represents the world. On the eagle’s wings rests the Bible, symbolising the gospel being carried to all corners of the Earth.

Attached to the first pillar in the south aisle is a copy of the charter dated 17th June 1320, establishing a perpetual curacy to the chapel at Thorne. The church has several lovely stained glass windows  particularly Sir Henry Holiday’s beautiful window in the south aisle.

In the late 15th century, the tower was rebuilt and battlements were added. The church has a fine peal of eight bells, though there are nine in the belfry. Three of the bells are dated 1671, one being almost a ton in weight. The unused ninth bell, the ‘Jinny Bell’, is very old and was likely used for the Angelus in pre-Reformation Days.

Near the south porch is a stone coffin. This was dug up by the sexton during the early 18th century and probably dates from pre-Conquest times. If you look at the top of the east side of the porch you will see that two medieval grave covers have been re-used. Recycling is not new!  Notice that, due to the large numbers of burials over the centuries, the ground in the churchyard is much higher than the road outside. This is now a ‘closed’ churchyard, but there are a number of table tombs, one of the most impressive being the Makin tomb.

Heavenly father, make the doors of this church large enough

to receive all who seek you and your love. Amen.

Thanks to Sue Holbrook for the text. 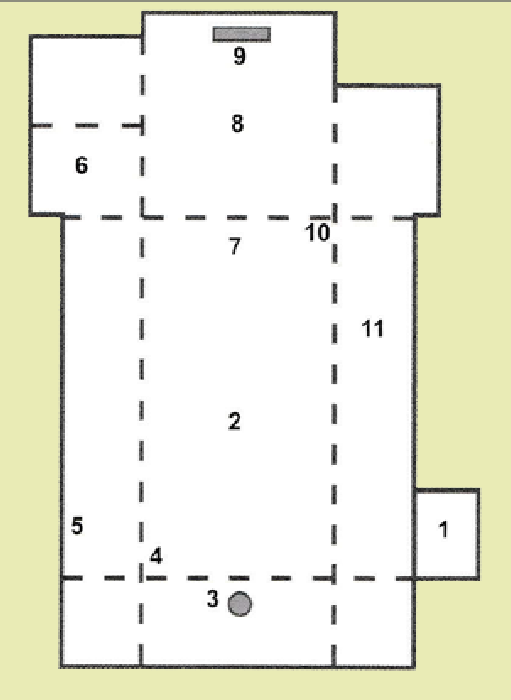 BACK TO WELCOME PAGE